Kingdom 648 will launch on Thursday July 16. 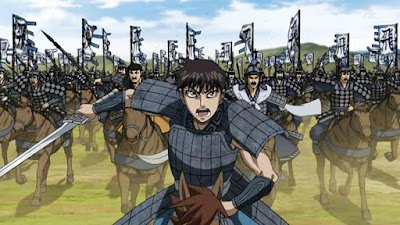 Chapter 647 is quite important in terms of the progression of the story. Zhao’s political arc has ended, Prince Sen defeated his brother Prince Ka to become King of Zhao.

Finally, this chapter begins with Riboku getting up and planning his next move. He summons his vassals who are Bananji, Shun Shin Ju, Futei, and Kaine to discuss their plans. Riboku is happy to see that they are all in one piece. We even have a first glimpse of Bananji after the war. It is confirmed that Bananji lost his right eye during his duel with Mouten.

During the meeting, Shun Shin Ju explains that they have three options. They can surrender and face the punishment of King Zhao, they can continue to flee, or they can invade Kantan and overthrow King Sen. Shun Shin Ju goes on to suggest that if they decide to go for the third option, they should establish Riboku as the king of Zhao. However, Riboku quickly kills Shun Shin Ju and explains that placing himself or Prince Ka as king of Zhao would never work because the citizens of Zhao would never accept new forcibly obtained royalties.

Riboku explains that they actually have quite a bit of time to dedicate, since Sen would have to go through the beginning to officially become king of Zhao. That said, Bananji comments that Qin poses the greatest threat to Zhao, and that it is only a matter of time before Sen and Kakukai plead with Riboku to return and repel the Qin invaders.

Riboku also understands that this is precisely what will happen. He knows that Kakukai will follow his advice on deploying troops to defend Qin, and that Qin will not be able to break those lines for a time. This time Riboku can finish his plan. Riboku continues explaining that everyone will go to Seika, which is the city of Shibashou. Riboku plans to go to Shibashou and recruit him along with them. With Shibashou by their side, they would add someone strong enough to be considered one of Zhao’s three great heavens. Finally, after recruiting Shibashou, they could return to Kantan and repel Qin to essentially save themselves from persecution.

kingdom 648 :- From there there is a jump of a year. The year is now 235 BC. C. We learn that Qin was unable to further advance his lines in Zhao. Readers are taken inside Kanyou, where Sei and many officials try to figure out what to do next regarding the Zhao invasion. During this meeting, Mr. Shi enters and asks to speak to Sei in private. The reason is to delay the news to get to Shou Hei Kun and Ri Shi for a while. Mr. Shi goes on to explain that Ryo Fui has been actively involved in recruiting officials from the Ketsu, Ai and his own faction factions. Ryo Fui’s power has been constantly increasing and again represents a significant threat to Sei. Shi suggests that Sei give orders to kill Ryo Fui and end the threat once and for all. However, Sei says that he will prefer to meet and talk to Ryo Fui before such an order is given.

For chapter 648 of the kingdom, let’s go from a short political arc Zhao to a political arc Qin. We can hope to learn more about Ryo Fui’s plans and his new internal infrastructure. Sei and Shou Bun Kun will also plan Sei’s visit to Ryo Fui and may discuss their purpose for the meeting. I am very curious to know if Sei will summon Ryo Fui to Kanyou, or if Sei will go directly to Ryo Fui and confront him. I do not expect the meeting between the two to take place in the next chapter, but it simply serves as a precursor to the meeting.

We may get an update on the front lines of Qin / Zhao. I hope to see some Ri Shin signs frustrated by the lack of progress of the Qin armies. Chances are Ousen has recognized that since Shin, Ouhon and Mouten now have full-fledged armies, which do not have a sense of urgency, they are slowly training these new recruits with real combat experience . The best training for new recruits is with real combat in real life. Now that a year has passed, these armies are likely to be stronger now that they have been engaged in almost constant battles. It could be similar to what Moubu did to his army against Rihaku during the Bayou arc.