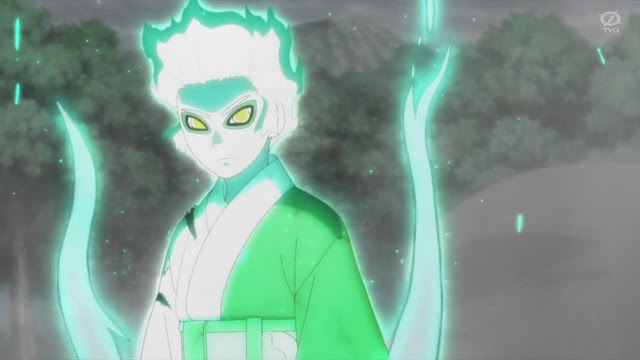 We also share like  like Black clover 266 and One Piece 991 need to be released, so we recommend that you check them out while waiting for Anime Boruto Naruto Next Generations Episode 167.

Anime Boruto Naruto Next Generations Episode 166 start with  Asaka thought the Huruga was dead. Boruto stopped Asaku from killing the Huruga and explained what had happened. The two of them embrace each other and Sharada was happy that the misunderstanding was over. Hiruga explained to Asaka that he is in the team 7 because someone was following the evil Hashirama cell. Hiruga made a deal with Team 7 so that after defeating the villain they could discuss what to do with the cell.

Suddenly Deepa appeared and threw Asaka and Hirugala with a single blow. Boruto looked up and saw her standing on a tree branch. Boruto  direct attack that did not work. Deepa explains her body with her jutsu and it repels all the attacks. Konohamar attack with a fire style dragon flame bomb that does not affect the Deepa. Deepa smiled at them and immediately said that he would kill them and take Hashirama cell.

Victor appears and Deepa says why did you take so long as an old-timer. Sharada thinks that Victor and Deepa are working together. Victor told Team 7 to give it back, as they were the first to get the Hashirama cell. Konohamaru refuses and Victor uses his jutsu and sends him a flying through the tornado. Victor tells Deepa to take care of genin and he take care of Jonin. Deepa is going to remove genin and take the cell.

Sharada used Sharingan finished and Boruto attacked with a powerful Rasengan‌ thinking tha finished the Deepa. Deepa smiles showing her that it didn’t work. Deepa says it is a warm-up and he turns his finger into metal, which sends Boruto at single touch. Asaka stood up and enchanted the Deepa using the Hashirama cell. He did so to prevent Boruto from being killed and to use the power of Huruga, Yuuga, and Yoruga. He transforms again as Deepa tries to grab the cell holding his hand.

He then released Haze Ninja Art: Forbidden Jutsu: Red Spider Lily and exploded with a Deepa. Deepa comes out after the explosion without injury, he wants to finish Boroto with an Iron Hummer fist. Misty turns out to be Justus, whose parents forbid him from using it and saving Boroto in a timely manner. He then released the Great snake lightning and took Boruto and Sharada for treatment. Deepa was happy that they  run away and he had a cell. Let’see what happen in Anime Boruto Naruto Next Generations Episode 167.

You can Watch Anime Boruto Naruto Next Generations Episode 167 online as soon as it is released from Crunchyroll  and Official website. please support the founders of New and publishers, we recommend that you Watch on official websites and applications. More updates of  Animes  will be available our website cuteeanimebook.